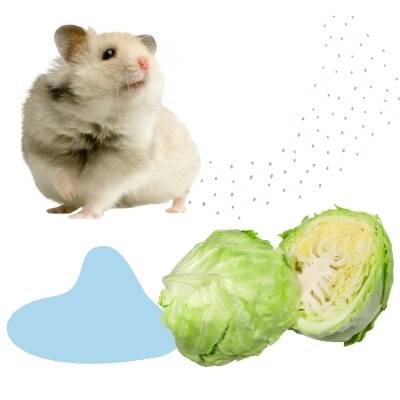 Can hamsters eat cabbage? This question haunts every pet owner or anyone interested in taking a hamster under their wing. Before delving into the diet of hamsters, it is important to note that hamsters are primarily omnivores. It is easier to answer whether hamsters can eat cabbage with that in mind. Cabbages are leafy vegetables that provide a rich source of minerals and nutrients and can be consumed by a hamster in various forms.

Before we go into the answer to this question, let’s have a look at some types of cabbages. There are various cabbages, including

to mention a few. Your hamster can eat all of these. These are all edible and safe for a healthy hamster. Despite them being completely safe to the hamster, they have slightly different nutritional value to the hamster. As versatile as cabbages are to humans, offering a range of vitamins, roughage, and carbohydrates, hamsters extract similar nutrients essential for their proper growth and development.

How To Offer Cabbage to the Hamsters

Despite cabbage being safe for hamsters, it is important to remember that the cabbage is prepared for them is crucial. Boiling the cabbage before handing it out to the hamster is not advisable. Raw cabbage might not sound enticing to most people, but this is not the case with hamsters. Hamsters enjoy raw cabbage as one of their favorite food materials. Besides preference, it is also healthier for rabbits to have their cabbage raw. Boiling the cabbage or exposing it to heat during cooking might lead to loss of the much-needed vitamins and nutrients, and therefore it is discouraged.

Hamsters can eat a variety of foods, we have researched lots of them. Check out this One: Can Hamsters Eat Sunflower Seeds?

How much Cabbage is OK?

Like the majority of the other rodent family members, Hamsters are incapable of rationing the amount of food they consume according to their metabolic requirements. Therefore, they are small animals and should consume slightly over two teaspoons of shredded cabbage leaves.

A whole cabbage leaf is way above their intake requirements. Because of their small mouths, the cabbage should be in tiny bite-sized pieces. Therefore, it is imperative for pet owners and caregivers to monitor their food and ensure it is within acceptable ranges.

Too much cabbage in the hamster’s body might lead to conditions such as bloating or constipation, threatening the well-being of the hamster.

Even in the right quantities, cabbage as the only food source for a hamster over a long time is still not advisable. Cabbages are among nature’s superfoods and can provide a wide range of nutrients, but they are still deficient in some other equally important minerals and nutrients.

For this reason, we introduce different types of foods for the hamster. Supplements for the hamster can take many forms, including pills or other vegetables. To help them acquire proteins, meat or simple cheese can be used.

Different hamsters have different dietary preferences, and for this reason, each hamster is unique. Some might enjoy cabbages to the extreme, while others prefer it in moderation. A few simple steps can be followed to find out what kind of hamster you have.

Introducing Cabbage To Your Hamster

If you are giving the hamster cabbage for the first time, it should be in extremely small quantities and only in accompaniment with the food it is used to. After this, you should monitor the hamster for any changes in their normal behavior. A sudden change might indicate intolerance to the cabbage.

If this is the case, one should withdraw cabbage from the diet until the cause of the change is established. If there is no effect on the hamster, and it finishes all the cabbage, then gradually substituting its normal food with cabbage can begin. It should be slow at first, and then the amount of cabbage in the diet is increased exponentially until it is the primary food source.

In summary, can hamsters eat cabbage? The short answer is definitely Yes.

Can Hamsters Eat Cheerios? What You Need To Know!