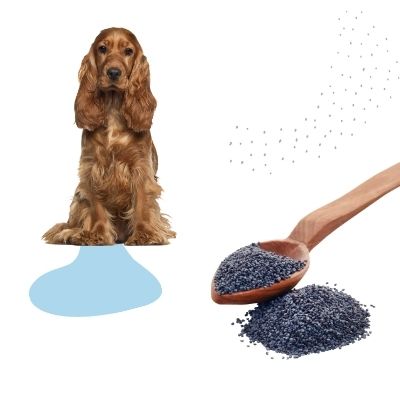 Dogs can eat some vegetables and fruits besides consuming meat, but their primary diet is meat because it is rich in proteins. Their nutritional requirements are such that they heavily depend on a protein diet. The poppy seeds may benefit humans, but are poppy seeds safe for your dog?

Can dogs eat poppy seeds? No, dogs should not eat poppy seeds as they are poisonous and may cause poisoning. Poppy seeds have certain toxic alkaloids to your canine friend and may produce tremors and seizures, affecting your dog’s nervous system. Also, if your dog consumes them in large quantities, they may hurt its digestive system.

Are there any health benefits of feeding poppy seeds?

Can dogs eat poppy seeds? Most people feed human foods to their furry fellows thinking that all human foods are safe for them. However, certain foods may be beneficial for your dog, but not all dishes are suitable for your dog’s consumption.

Poppy seeds are one such food item that may be beneficial for humans but are completely unsafe for your puppy and carry no health benefits. They may not be lethal in small quantities, but their side effects can disturb your dog’s normal growth.

The misconception that human foods provide the same benefits to dogs has led to many problems after dog owners feed certain human foods like poppy seeds, instead of providing health benefits, damage your pup’s body systems. So, it is not wise to feed poppy seeds to your furry fellow because they are not safe.

Risks of feeding poppy seeds to your dog?

Can dogs eat poppy seeds? If a diet does not deliver essential nutrients to your canine friend, it is useless to feed that food. But if that diet is toxic to your dog, it must not be provided to your furry friend as it may be a potential health hazard.

Poppy seeds are not feasible for your dog as they contain two alkaloids known as morphine and codeine. The human digestive system is more potent than a dog and can easily digest these seeds without difficulty. Poppy seeds may cause poisoning in your furry friend.

Poppy seeds toxicity has several symptoms depending on the severity of the adverse reaction. The common symptoms include difficulty breathing, trembling, and ataxia. Also, your dog suffers from a decreased heart rate and lack of appetite.

We have written many articles about what dogs can eat. But did you know about this one? Can Dogs Eat Ground Turkey?

It also has a sedative effect on your dog, and it becomes sleepy. Generally, the alkaloids found in poppy seeds are used to relieve pain in humans, but in dogs, they affect the central nervous system, deteriorating its brain health. Your dog may become unresponsive after eating poppy seeds.

What if my dog eats poppy seeds?

Can dogs eat poppy seeds? Poppy seeds contain alkaloids damaging your furry friend’s health but may not be lethal in small amounts. However, if your dog consumes poppy seeds, watch out for the harmful symptoms, and you should immediately contact your veterinarian.

Also, provide plenty of water to your canine buddy to neutralize the toxicity and induce vomiting in case of severe poisoning. Generally, activated charcoal is given to expel toxins out of the body, and fluid therapy is done to balance the electrolytes.

Are poppy seeds bad for dogs to eat?

Can dogs eat poppy seeds? Poppy seeds are considered toxic to your canine friend because they contain alkaloids dangerous to your dog’s health. If your dog eats poppy seeds in an excessive amount, it can cause coma and eventually death. So, avoid feeding poppy seeds to your dog.

The extent of toxicity depends on the size and breed of your dog. Not all puppies are equally affected by poppy seeds. Dogs of smaller size may suffer more badly than large-sized dogs.

Another risk is that besides affecting the nervous system, ingestion of large quantities of poppy seeds can cause damage to your dog’s digestive system. It may result in diarrhea, vomiting, and abdominal pain.

Are poppy seeds safe for dogs?

Can dogs eat poppy seeds? No, poppy seeds are unsafe for your dog as they do not provide beneficial nutrients but cause severe toxicity in your puppy. So, you should not feed them even in a small quantity.

So, can dogs eat poppy seeds? No, poppy seeds are harmful to your dog as they contain toxic compounds which can make your canine buddy unhealthy and weak.